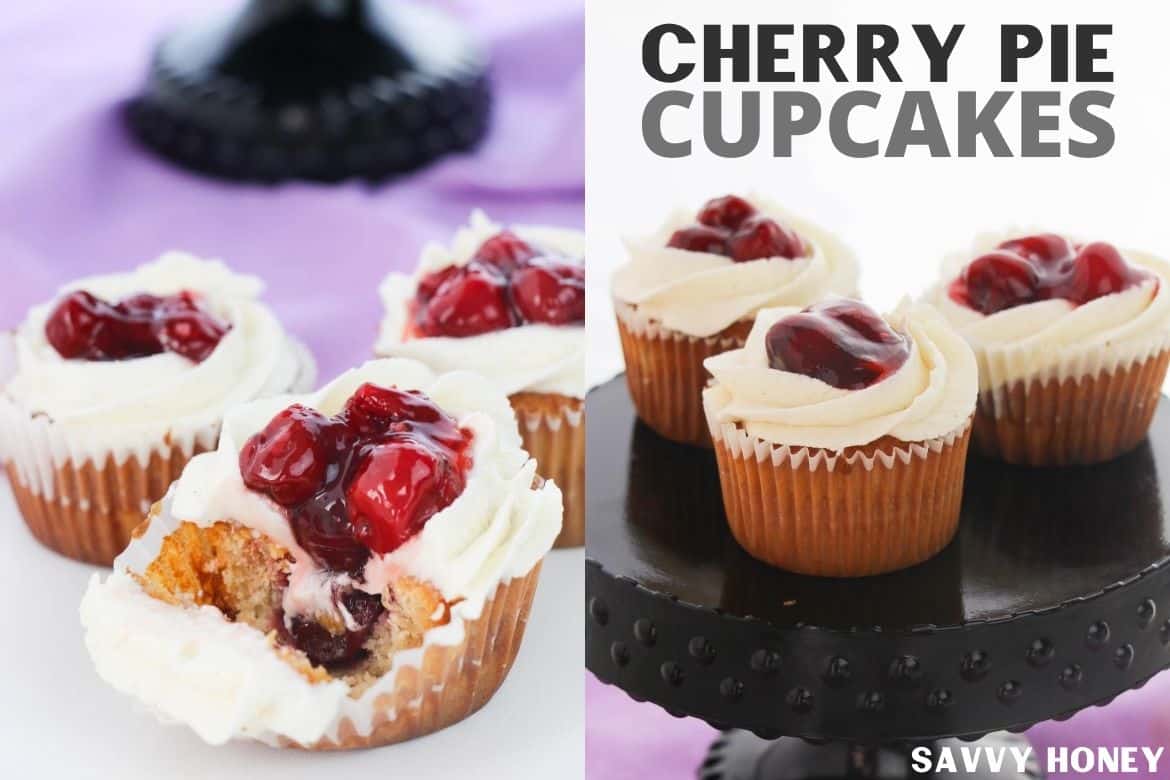 THIS POST MAY CONTAIN AFFILIATE LINKS, PLEASE READ MY DISCLAIMER FOR MORE INFO.

These cherry pie cupcakes are so decadent and delicious, you’ll be amazed at how fast they disappear.

But isn’t everything better in cupcake form?

The cherry cupcake boasts subtle flavors of vanilla and cinnamon, but the star of the show is the surprise cherry pie filling in the center.

Best of all, this recipe calls for canned cherry pie filling.

No need to spend a bunch of time making cherry pie filling from scratch. This easy hack saves you time but doesn’t sacrifice flavor.

Just when you think it doesn’t sound more mouthwatering than that, it is topped off with an out of this world cinnamon and vanilla frosting.

Oh, and I forgot to mention the other topping, a little more cherry pie filling, yum!

Every time I make this dessert recipe, people rave about it and ask me for the recipe.

If you’re looking for a wonderful and versatile dessert recipe that’ll please both adults and kids, these cherry cupcakes tick all those boxes (and then some).

This is also a great dessert recipe to have on hand because you can serve it year-round. During spring and summer, cherries are quite refreshing.

But, this cherry pie cupcake recipe also works well during the fall for Thanksgiving or winter months because of the wonderful cinnamon flavor in the frosting.

Because it’s topped off with a festive red pie filling, these cherry pie desserts are perfect to serve for Christmas or Valentine’s Day as well.

This recipe is pretty straight forward, and you’ll find all the easy recipe directions later in this post.

With that being said, here are some helpful tips with pictures to help you out when it comes to filling your cherry pie cupcakes and frosting them.

How To Fill Your Cherry Cupcakes With Canned Pie Filling

Follow the directions in the recipe (listed later in this post) for making the batter, pour the batter into your cupcake pan, and cook for 5 minutes.

Once you take the cupcakes out of the oven after baking for 5 minutes, then the fun part begins!

Place one tablespoon of canned cherry pie filling in the center of each cupcake.

Since the cupcakes were only baked for a short amount of time, the cherry pie filling will naturally settle into the cupcake.

Then, cover the cupcakes with leftover batter. This comes out to about 1½ tablespoons of batter, but it’s fine to eyeball it.

Just make sure the cupcakes are covered with the batter and hardly any cherry pie filling is peeking through.

Start prepping your frosting while the cupcakes are cooling. Once your cupcakes are completely cool, now it’s time to add the vanilla cinnamon frosting.

To frost these cupcakes, I used a piping bag with a large star tip. You can of course use your piping tip of choice.

Then, make a quick circle swirl on each cupcake (again make sure they are completely cooled down).

Your frosting swirl should be nice and tall and rest on the edges of the cupcake.

Make sure you leave a little hollow area in the center of your piped circle because that is where the cherry pie filling will go.

To finish it off, top off your cupcake with about a tablespoon of canned cherry pie filling in the center of your frosting swirl.

A tablespoon is just an approximate amount, you can do a little bit less if you like.

Make sure you spoon out the filling in the center part of the frosting.

Frosting Without A Piping Bag

Another option if you don’t want to get all fancy is skipping the piping bag altogether.

Simply frost your cupcakes with a knife and top with some pie filling.

These cherry pie cupcakes with cinnamon vanilla frosting are the perfect dessert for any time of year.

Filled and topped off with canned cherry pie filling, this is an easy recipe you’ll get requests to make again and again. 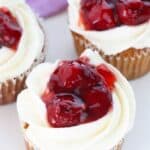 Using unsalted or salted butter comes down to your personal preference.

For my baking, I typically opt for salted butter but if you are trying to limit your salt intake or just prefer unsalted butter, either one works well in this recipe.

The vanilla paste in the frosting has a lovely concentrated flavor, more so than vanilla extract.

If you don’t have vanilla paste on hand, you can substitute up to 2 tsp. of vanilla extract in the frosting recipe.

As stated in the directions, you can use either milk or heavy whipping cream for the frosting.

This really comes down to your personal preference and which ingredients you have on hand.

Another plus of using milk is it is one less ingredient to buy, so I wanted to list it as a substitute.

The milk and powdered sugar amount varies a bit in the recipe to give you flexibility to make the frosting to your taste and texture liking.

Want a stiffer and thicker frosting?

You’ll want to use more powdered sugar and less milk or cream.

Want a softer and fluffier frosting instead?

Use more cream or milk and less powdered sugar.

Add a little bit of cream (or milk) and powdered sugar as you go and then adjust it to your liking.

Did you make this recipe?

Comment below and let me know how they turned out or any substitutions you made!!

Or better yet, snap a pic of your cupcakes and add it to the Pinterest pin linked below.

31 Easy Dinners That Are Freezer Friendly (And...

Hi there, I'm Annie - creator of Savvy Honey. I'm here to help you live easier by offering savvy ideas, tips & inspiration in all areas of life!

10 Keto Snacks For Summer That Are Beyond...